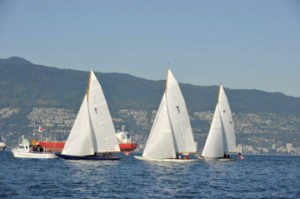 R Class is the designation for vessels rating 20 ft. under the old Universal Rule. The classic J-Boats of 1920’s America’s Cup clashes are the image that most people have of racing from this era. But in reality it was its little sister, the R-Boat that was the centre of attention for high performance sailing in the 1920’s and 1930’s with large fleets on both the west and east coasts of North America.

The first R Class boats were designed and raced in the years leading up to World War I, but it was after the Great War that R Class came into its own with more than 100 boats build between 1918 and 1930.

As long as there have been sailboats, people have wanted to race them. In the earliest days of yacht racing, including the first America’s Cup races raced off the Isle of Wight in 1851, the fastest boat was the winner regardless of how large or how much sail. As racing became more sophisticated, different rules were proposed based on a vessel’s length or displacement, but each had only local followings or major failings. A standardized classification of yachts was proposed by Nathanial Herreshoff in 1898 and adopted several years later by the forerunner of the North American Yacht Racing Union (itself the forerunner of today’s Canadian Yachting Association and US Sailing). This rule came to be known as the Universal Rule.

Under this Universal Rule a Rating was calculated:

It is important to note that 20 foot refers to the rating by formula, not the actual length of the vessel which was decided by the designer to meet his idea of optimization of the formula. Typically R Class boats had overall lengths between 35 and 40 feet.