Between 1914 and 1940, the Lipton Cup Races between Vancouver and Seattle were held in R Class sloops, essentially a 40 foot version of the majestic J Class yachts that sailed for the America’s Cup during the same period.

Lady Van was the epitome of sailing technology. To design their craft, the Canadians choose famed English designer Charles Nicholson, designer of the 130 foot J Class, Endeavor, arguably the fastest J Class of her time. The Vancouver sailors had some pretty definite ideas about what it would take to beat the Yanks. In their design brief to Nicholson they called for a lightish boat that could tack and accelerate quickly in light winds of summer and just to be on the safe side, they included all the data from Sir Tom. 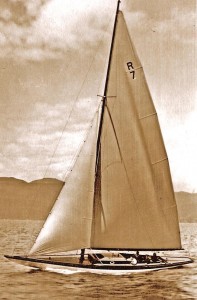 Nicholson delivered in spades. His design was sleek and carried a cloud of sail to boot. Lady Van was, as they say in the yacht club bar, a pencil – almost 40 ft long and barely over 7 feet wide. Her freeboard amidships was a scant 20 inches. No detail was overlooked; streamlined hollow spars, lightweight double planking, twin forestays, even a modern genoa jib was set on her towering Marconi rig. Lady Van was built on the north shore of Burrard Inlet at the Vancouver Drydock Company for a Vancouver syndicate lead by Tom Ramsay.

After 69 years in Seattle, Lady Van has come home. She was acquired in 2009 and underwent an extensive restoration in Sidney, BC. Lady Van was re-christened on June 21, 2010 and was raced in several events over the summer. The immediate goal of the Society was was to have the vessel ready by October 2010 to compete for the right to defend the Alexandra Cup for the Royal Vancouver Yacht Club against a challenge from the Seattle Yacht Club using The Center for Wooden Boats’ R Class vessel Pirate. Lady Van was very much up to this challenge and on October 16, 2010, Don Martin lead the Lady Van team to a victory over Pirate in a 9 flight, match racing series. 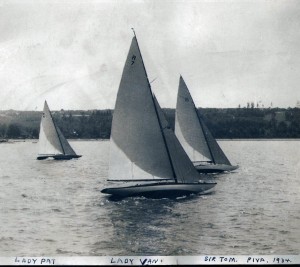