It was a long, process full of ups and downs. But as she took shape, there was never a doubt that Lady Van was going to be a beauty.

A Reception was held to celebrate the Re-Christening of Lady Van on Monday, June 21 at the Royal Vancouver Yacht Club.

Following a blessing from Honorary Chaplain Nick Parker, with the immortal words, “I bless this vessel and all of those who will sail in her”, Commodore Sarah Howard broke a champagne bottle on the nose toe Lady Van (actually on a sacrifical board) to official re-christen the Lady Van and welcome her to the Royal Van fleet. in the water preparations can now begin for her to defend the Alexandra Cup. 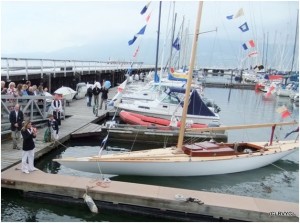 Commodore Howard Does the Honours

A special guest on had for the ceremony was Jean Black, daughter of Jack Cribb, the famous skipper of Lady Van who won the Lipton Cup for Vancouver in 1929.