Charles E. Nicholson (1868-1954) joined the Gosport, UK firm of Camper and Nicholsons, run by his father Ben, in the 1890’s. He emerged as the consummate yacht designer, able to combine elegance with speed and seamanship.

Nicholson’s first design of note was the Redwing class, designed for the Bembridge Sailing Club as a single-hander, to replace the expensive half racers. He designed the yacht in ten days, and by 1898 the fleet consisted of 16 boats, all built by C&N’s yard.

Nicholson’s reputation as a yacht designer was undoubtedly enhanced by the fabulous racing performance of his 1912 Marconi rigged 5-Meter yacht ISTIRIA, the first yacht to be built with lightweight laminated wood. This was followed by his 1913 Class-A schooner MARGHERITA. The schooner won five first prizes out of six races in her first season, and according to Nicholson’s son John, was “probably the fastest yacht ever built by my father in his long career.”

The publicity attending these fast yachts, combined with the fine reputation of the firm of C&N, of which C.E. Nicholson was now the chairman, influenced Sir Thomas Lipton to choose Nicholson as designer for his fourth attempt to win the America’s Cup in 1914. A naval architect as well as a builder, Nicholson had a great deal in common with N.G. Herreshoff, his principal rival. Charles designed SHAMROCK IV which raced in 1920 after WW I, and later SHAMROCK V, one of the first J-Class boats, for the 1930 America’s Cup. In 1934 with ENDEAVOUR for Sir Tom Sopwith, Nicholson married a sleek hull with an innovative, efficient rig and produced arguably the fastest J Class boat ever. His final America’s Cup effort, ENDEAVOUR II of 1937, was the largest racing cutter ever built by C&N.

The height of Nicholson’s career was probably the 1937 Cowes Week which came to be known as Charlie Nicholson’s Regatta. All of the J-Class boats, three quarters of the 12 Metres, half the 8 Metres, and a large percentage of the ocean racers were from Nicholson’s board. And many of the motor yachts in the spectator fleet were designed by Nicholson as well.

Charles E. Nicholson continued to chair C&N until his death in 1954 at aged 86. He was inducted into the America’s Cup Hall of Fame in 1997. 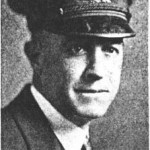 In 1899, at age 14, he and a friend designed and built the 24-foot centerboard racing sloop Empress. Four years later, Geary designed and built Empress II, another 24-foot centerboard racing sloop which was never defeated in local races with Geary at the helm. While a sophomore at the University of Washington he designed Spirit, a 42-foot LOA racing sloop for the Seattle Yacht Club which would go on to challenge Alexandra from the Royal Vancouver Yacht Club for the Dunsmir Cup in 1907. Geary’s success attracted the attention of several prominent Seattle businessmen who at Geary’s suggestion would finance his education as a naval architect at MIT.

Geary would design several more competitive sailing vessels and crewed on many others in his long career. Among his designs are Sir Tom, an “R” class boat that dominated the racing circuit along the West Coast for three decades; Katedna, later Red Jacket, a 62-foot LOA schooner which would enjoy unrivaled success in Northwest racing; and Pirate, another successful “R” class racer. In 1928 Geary would design the popular “Flattie,” a one-design sail trainer that is now known as the Geary 18.

Geary started his professional career designing commercial vessels, including Chickamauga, the first diesel-powered tug in the United States, commercial and fishing vessels, and during WW I, large 330-foot wooden-hulled freighters. Geary also designed fast commuter yachts such as the 55-foot LOA Geoduck built in 1913 by the Johnson Brothers and Blanchard for W. G. Norris and the 43-foot LOA Winifred built in 1921 by the N. J. Blanchard Boat Building Company.

Geary moved to Southern California in 1932, attempting to attract additional wealthy clients. But with the Depression lasting throughout the 1930s, he received few commissions, the exception being Stranger, a 135-foot LOA, built in 1938 by Lake Union Drydock Company and used secretly for charting the Pacfic prior to WW II, and later by the Scripps Institute. By the time he went to work at Craig Ship Building Company in 1939 to conduct stability testing during WW II,  his career was near its end. Ted Geary died on May 19, 1960. 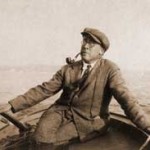 Charles Drown Mower (1875-1942) of New York was a noted yacht designer and author, and was at one time design editor of the Rudder magazine and a contributing author to Motor Boating magazine.

He starting studying yacht design in 1895 with Arthur Binney and later Bowdoin Crowninshield, and then moving on to a partnership with Thomas D. Bowes in Philadelphia in 1911.After the war Mower worked either alone or in partnership as Mower and Humphries Ltd. He was also a chief naval architect at Henry B. Nevins, Inc.,  and in 1937 was associated with the office of Nelson & Reid, Inc. He was also official measurer of the Manhasset Bay Yacht Club, the Cruising Club of America, and the New York Yacht Club.

Some Mower yachts designs that have been well publicized include the A-Cat, the R-Class yachts Ardette and Ace, The Legendary, the Fishers Island Design, individual projects such as the Lake Michigan based 1934 Tops-o-Cotton and Uwhilna, as well as numerous small dinghies and hydroplanes.

Edson Burr Schock (1871-1950) began his yacht design career at the age of 28, when he started working as an apprentice draftsman for A. Cary Smith. In 1900, only a year later, Schock opened his own office. In the early years, he supplemented his business with jobs at the Cramp Shipyard in Philadelphia and a shipyard in Groton, CT. Between 1906 and 1910, he was the design editor for Rudder magazine, and he continued to write articles for various publications throughout his life.

At the request of a client in 1910, Schock moved to Vancouver, BC, to supervise construction of a yacht, and he spent the next 40 years at several locations on the West Coast. In 1922, he set up shop in Los Angeles and capitalized on the growth of the movie industry. He spent much of World War II in Stockton, CA, where he designed minesweepers and tugs for the war effort. In 1949, he moved to Kingston, RI, to be near his son, Edson I. Schock. Schock’s design career is characterized by its diversity – he drafted racing power boats, motor yachts, racing and cruising sailboats, military and government craft, as well as a variety of commercial vessels such as freighters, tugs, and fishing boats. 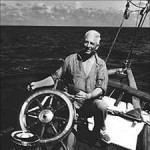 John G. Alden (1884-1962) was a very prolific designer working out Boston, as well as a highly successful racing skipper. He was born in Rhode Island where he was heavily influenced by fishing schooners and small racing vessels. He started work under Edward Burgess, but founded his Alden Design Office in 1909. He became known worldwide for producing fast and seaworthy offshore yachts, particularly the ‘Malabar’ series of yachts which won a series of Newport-Bermuda races in the 1920’s and 1930’s.

Alden designed a broad range of over 1000 exceptional boats including offshore and inshore racing sailboats, cruising yachts, and power cruisers.

George Owen (1877-1959) was born in Cambridge, MA but spent time sailing in Rhode Island where his family owned boats built by Nathanial Herreshoff. Owen graduated in mechanical engineering from MIT. He worked as a draftsman for Herreshoff Manufacturing and later moved to Hamilton, ON where he commenced his career as a designer and started a long association with Canadian yachting.

By 1908, Owen was a full time designer and turned out 24 yachts to the Universal Rule in the Pre WWI years, many turning out to be champions. His famous N-Class Dorello with innovative high aspect ration rig lead him to design the J-Class Defiance for the 1914 America’s Cup. Unfortunately this lead to disappointment and Owen turned to academia becoming an MIT professor in naval architecture from 1915 to 1949. Many well know designers studied under Owen including Edson Schock and Phillip Rhodes. He continued to design and was responsible for many experimental and specialized designs, including the locally famous HMCS Oriole. He was also instrumental in the commencement of college sailboat racing designing the MIT Tech Dighy.